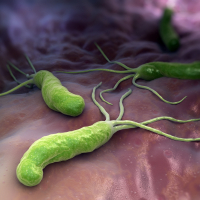 A new review published in the Cochrane Library, indicates that eradicating Helicobacter pylori bacterium— the main cause of stomach ulcers - with a short course of therapy comprising two commonly used medicines may help to reduce the risk of gastric cancer. Stomach, or gastric, cancer is the third most common cause of death from cancer worldwide, and people who are infected with the Helicobacter pylori bacterium are more likely to develop the disease.

About two-thirds of us have H. pylori in our bodies, but in most cases we experience no discomfort or other symptoms. However, it can be eradicated with a simple short course of antibiotics, often used with another medicine that suppresses the production of gastric acid. To determine whether eliminating H. pylori might reduce the incidence of gastric cancer, researchers analysed all published randomized controlled trials comparing at least one week of H. pylori therapy, with placebo or no treatment, in otherwise healthy and asymptomatic H. pylori-positive adults. The review included only trials that followed participants for at least two years and that had at least two participants who developed gastric cancer.

Six trials with a total of nearly 6500 participants met the researchers’ criteria. One study was conducted in Colombia and the remainder were conducted in Asian countries, with four in China and one in Japan where stomach cancer is more common. The studies mainly used a combination of antibiotics with medicines from a class of drugs that suppress gastric acid production (Proton Pump Inhibitors). An analysis of the studies’ results revealed that combining antibiotics with gastric acid suppressor therapy given for between 1 and 2 weeks prevented the development of gastric cancer compared with placebo or no treatment: in the studies, 51/3294 (1.6%) of the people given H. pylori treatment developed gastric cancer compared with 76/3203 (2.4%) given no treatment or a placebo. However, the number of deaths from gastric cancer in the trials was low, and there was insufficient evidence to be certain whether eradication improved survival.

“The findings of this systematic review and meta-analysis add to the increasing evidence that eradicating H. pylori in the general population has the potential to prevent gastric cancer. International guidelines for the management of H. pylori infection may change as a result,” said co-author Paul Moayyedi, of McMaster University, in Canada. “More research is needed on the extent of this effect and on any potential harms of H. pylori treatment before it can be advocated as a means of preventing gastric cancer.“

“The review highlights the need for further trials in different populations to provide more evidence, and these should report both the benefits and harms of such an approach,” said lead author Alex Ford, of St. James’s University Hospital, and Leeds University in the UK.

You can access the Spanish version of the review here